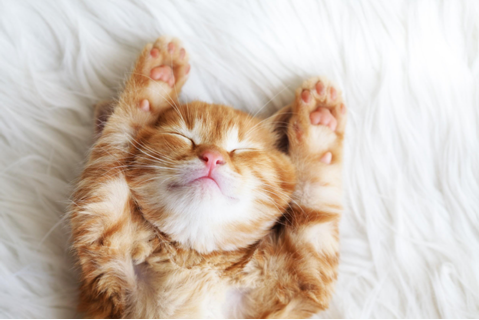 The domestic cat is now the world’s most popular pet, but cats were not always tame. The relationship between humans and cats began in the Near East about 10,000 years ago, when cats killed the rodents that ate grain stored in towns and villages. They were kept as pets in Egypt from about 2000 BCE, but the different breeds have only been created over the last hundred years or so.

The family history of the domestic cat is quite amazing, the cat goes way back in time, long before the first humanlike primates walked the earth. All cats from tigers, jaguars, and other big cats to smaller lynxes and ocelots belong to the family of mammals called Felidae, which contains 41 living species. The domestic cat is subsided from the African wildcat, and it is generally considered to be a wildcat subspecies.

But how did cats become pets? See, the wild species of cats are naturally frightening of humans. But over time natural selection favored those cats that were least scared of people and adaptable enough to change from being solitary hunters to living in close proximity to humans and other cats. By around 2000 BCE the cat had become fully domesticated and was living in the homes of the ancient Egyptians as a much-loved pet that also kept rodents under control. From Egypt the domestic cat would eventually spread to homes in nations around the world.

Domestic cats display many of the same instincts as their wild relatives such as, stretching frequently, to keep their muscles limber in case they need to sprint after prey or away from danger. 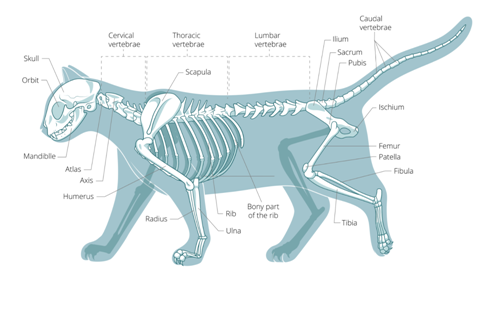 The feline body structure is built to be a predator. The skeleton, which evolved for speed and agility has slender limbs, a flexible spine, and a narrow rib cage to protect the heart and lungs, both of which are adapted for short bursts of speed. The shoulder blades are not attached to the rest of the skeleton but held in place by muscles and ligaments, this allows the cat to extend its stride when running. A domestic cat brain is about 25 percent smaller than that of a wildcat. This is because the areas of a wildcat’s brain involved in mapping a larger territory are no longer needed by domestic cats.

Have you ever wondered what cat whiskers are used for? The cat uses their whiskers as touch sensors. They help cats navigate in the dark and they help them sense objects that are nearby.

The large wide-set eyes face forward for judging distances when hunting. Night vision is enhanced by the tapetum lucidum, this is a reflective layer behind the retina that bounces any light entering the eye back through the retina.

An adult cat has 30 teeth. The incisors are for grasping and grooming; the canines for stabbing and grabbing prey. The carnassials at the side are utilized for cutting flesh. 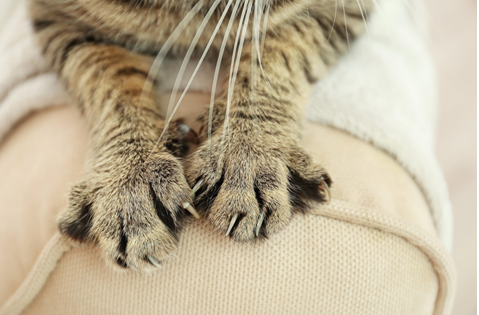 Domestic cats are digitigrades, this means that they walk on their toes. The toes have curved claws for scratching, fighting, and gripping. The claws are retractable: they can be slid back into sheaths for stealthy movement.

Being carnivores, cats have a relatively short intestinal tract, because it is easier to digest meat than plant matter. A domestic cat tract is a litter longer than that of a wildcat. This reflects dietary changes-primarily the cereal content in food scraps scavenged from humans over millennia. Cats have scent-producing glands in the skin around the mouth and tail, and also on the paws. They mark their territory using these scents and by scratching surfaces. A cat’s eyes are highly sensitive to small movements but their color vision is poor, since cats are primarily nocturnal animals.

Cats have a wider range of hearing than humans, enabling them to detect the high-pitched squeaks of rodents. In addition to an acute sense of taste and smell, cats have a sensory organ in the roof of the mouth-the vomeronasal, or Jacobson’s organ. To use this organ, Cats contort their face (an action called the Flehmen response) as they pick up scents-usually those left by other cats. The several sets of whiskers on the face are highly sensitive to touch and air currents

Eastern breeds, such as the Siamese, tend to have a slender and supple body with thin limbs and tail. This shape particularly suits a warm climate because it gives the body a large surface area, in relation to its volume from which excess heat can disperse. The Western breeds, such as the British Shorthair are most longhairs, are suited to temperate and cool regions. They tend to have a thickset, or cubby, body with a stockier tail and limbs. In this instance, the shape minimizes the body’s surface area and helps to reduce heat loss. 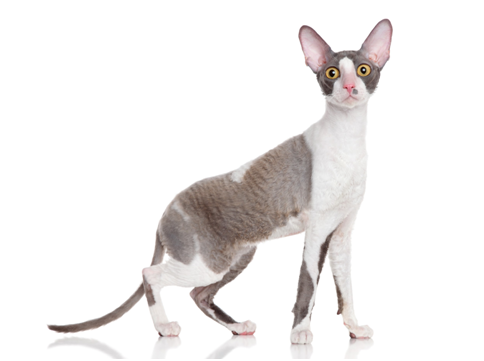 Coats are generally produced from three types of hair: down, awn, and guard. Soft, wavy down and fine, mid-length awn form an insulting undercoat, while the longer, stiffer guard hairs form a protective outer coat. The lengths and proportions of these types of hair vary among breeds, and not all breeds have all three types. Most cats are shorthaired, like their wild ancestors. Long hair is caused by a recessive gene. In Persians the hair may reach up to 5in (12cm) long. Curly, or rex, coats are the result of genetic mutations; there are now several rex breeds, including the Cornish Rex and American Wirehair. There are also breeds, such as the Sphinx, with mutations that cause hairlessness.

Cats make rewarding, lovable pets, but owning one can require a lot of time and money. If you think you would like to own a domestic cat, you will need to do some research to make sure you are ready for the responsibility. If your heart is set on owning a purebred cat, you will need to make sure you find a reputable breeder, though you may also be able to find a purebred in a rescue center.

Owning a domestic cat might seem like a good idea; but you should give the idea serious consideration before you buy or adopt one. Consider if a cat will fit into your lifestyle. It is unfair to a cat to leave alone for long periods; they may seem independent, but cats need human companionship. Neglected outdoor cats may wander off, while indoor cats can become bored and destructive. It is not a good idea to get a cat if anyone in your household is allergic to cats or becomes asthmatic around them. Think carefully too if you have young children; since you will need to spend time teaching them how to handle a cat. 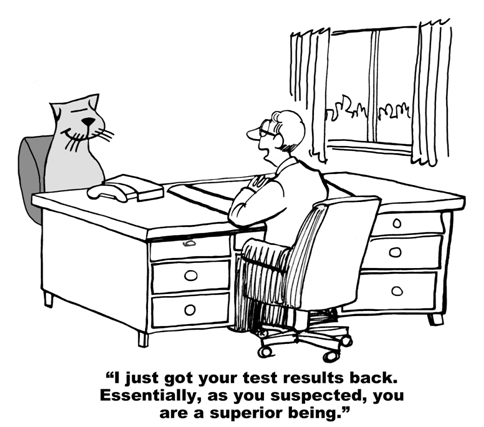 You will need to cat-proof your house, keep breakable items out of reach; and remove potential hazards such as household plants that can be poisonous to cats. Also, you will need to find somewhere to put your cat’s litter box; and change it position regularly.

You should also think about what gender and age of domestic cat will suit you. Male cats are usually bigger than females and may be more outgoing, but both make trouble-free pets once neutered. If you’re anxious about house training a kitten, you could buy or rescue an adult cat. Finally, if there are stretches of the day when no one is at home; you might want to consider getting two cats, so that they can keep each other company.

To provide an all-natural Super Omega, Prebiotic CBD products that will enhance the entire life span of your pet’s wellness physically, mentally and emotionally. This will reduce the financial and emotional pain we have for loving our pets.